HAMSA, HANSA – (1) An incarnation of Vishnu in Krita Yuga (the second age) 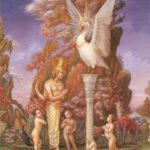 According to the Bhâgavata Purâna Hamsa was a prajâpati, a progenitor or creator.
Hamsa taught yoga to sages like Sanaka and taught the way to liberation
for the Sâdhyadevas, a class of divine witnesses of battles and celebrations in
late mythology. Hamsa, like Vishnu, was also called the sacrifice (yâjña). The
teachings of Hamsa were known as the Hamsa Gîtâ, a sacred book no longer
extant. Hamsa did not become important enough to be included in lists of incarnations
of Vishnu and became one of the many incarnations to be forgotten or
reduced to a category of partial incarnations.
See also Avatâra; Vishnu
(2) A gandharva (celestial musician)
Hamsa was given a partial incarnation as Dhritarâshthra, whose role in the
Mahâbhârata deserved an important prior existence. As a gandharva, he was the
son of Kasyapa  Prajâpati by his wife Arishtâ