HIRANYAHASTA – Son of a princess 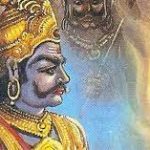 Hiranyahasta‘s story came from a time when gods had sons with princesses. Hiranyahasta‘s mother was Princess Vadhrimati, who was married to a eunuch. Despondent that she could not have a child, Vadhrimati prayed to the Asvins, the divine twins. The physicians of the devas happily fulfilled her desire. Hiranyahasta grew up a sage, possibly even a brahmin, since he married the daughter of the sage Matarisvan. Another version said he married a princess, the daughter of King Madirashva.