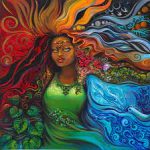 In the Rigveda, ida was a word for food or refreshment, especially milk. In the hymns ida worked metaphorically as the refreshment given to the devas (gods) as praise. Thus, it connected with vac (sound) and could be personified as Ida, the god­dess who instructed the first Manu concerning the rules for an efficacious sacrifice.
In the Taittiriya Brahmana the role of the priest can be seen as expanding; Ida is described as created by the first Manu out of his sacrifice. She was sent by him to see how the devas performed the consecration of fire (agnyadhana), and she returned with the shocking information that their method was less effective than hers. So she constructed the three firepits (trividhagnis) properly. The devas invited her publicly to instruct them. The asuras (demons) seemed to have some reservations about being taught by a priestess, so they only invited her to come to them in secret. Ida accepted the invitation of the devas, and her instruc­tions were witnessed by all creatures. The story concluded that this was why all creatures came to worship the devas instead of the asuras.
The Ida myth has elements that are quite ancient. There was a sameness priestess-goddess who taught gods and priests. There was, simultaneously, metaphor and personification. The clear process of ritualization can be seen as Ida’s birth from fire is changed to her birth as the daughter of the first Manu. And there is the boast in this myth that the sacrificial ritual (yajna) of the brahmins was more effective in controlling the powers (maya) of the universe than the power of the gods.