JAJALI – A hermit mentioned in the Mahabharata 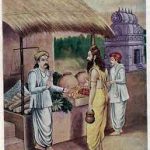 This myth presents two competing spiritual paths: one of austerities (tapas) and another of spirituality located in a householder’s life.
Jajali had developed into a great ascetic. One day as he was doing a standing meditation, a pair of birds built their nest in his matted hair. So began a period when the mother bird laid her eggs, these hatched, and the young birds were raised. Still Jajali remained motionless. Finally they flew away and did not come back. Only then did Jajali go to the sea and bathe. He proclaimed to the sea that surely there was no more virtuous man than himself. But a voice—some texts say from heaven, others say that of a sea demon—spoke back to him: that there was a merchant (vaisya) in Kashi (Benares) named Tuladhara who was more vir­tuous than he. So Jajali went to the city, found the vaisya Tuladhara, and dis­covered that what was said was true. He became Tuladhara’s disciple and thereby gained heaven.