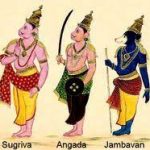 There is a lot of confusion as to whether Jambhavan was a monkey (kapi) or a bear (riksha). Valmiki’s Ramayana presented some stories of Jambhavan as a bear and other stories of him as a monkey.
In one version Brahma sent the celestial damsels (apsaras) to be reborn around Rama and help him defeat the demon king Ravana and one was born as Jambhavan. Other versions stated that Jambhavan was reborn at each of Vishnu’s incarnations, not just during his incarnation as Rama. It was in the Krishna incarnation that, as a bear or a monkey, Jambhavan came into posses­sion of the magical gem, Syamantaka. The jewel protected the virtuous and harmed those who were evil. Surya, the sun god, had given the jewel to King Satrajit, whose evil brother Prasena wore it hunting and was killed by a lion, which was in turn killed by the bear (or monkey) Jambhavan. Krishna went into the forest (or a cave in the bear version) and after a twenty-one-day battle was given the jewel by Jambhavan. Jambhavan became an ally of Rama and led his army (of bears or monkeys) against Ravana. He also became the father-in-law of Krishna, giving his daughter Jambavati to Krishna as one of his wives. One ver­sion said that the jewel was given to Krishna as dowry. In any case, Krishna returned the divine jewel to King Satrajit.