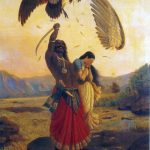 Jatayu was one of two sons born to Aruna, chariot driver of Surya (the sun god), and Shyeni, a divine bird. In his youth Jatayu was saved by his brother Sampati as they raced toward the sun, Sampati allowing his wings to be burned as he shielded Jatayu from the sun. It was Jatayu’s role to inform Rama that Sita had been abducted by Ravana. Jatayu saw Ravana escaping with Sita through the air in his celestial chariot. Jatayu intercepted Ravana, and a great air battle ensued. Ravana eventually cut off Jatayu’s wings. Sri Rama and Lakshmana discovered the dying Jatayu and learned about Ravana and Sita’s abduction. Jatayu died chanting Rama’s name. (Sri Rama and Lakshmana lit his funeral pyre. The celes­tial bird’s soul gained liberation (svarga).