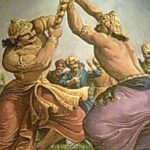 Jarasandha, mighty king of Magadha, was born by double magic, first from a brahmin and second from a giant demoness (rakshasi). His parents had been childless. They enlisted the sage Kakshivan (some texts say Candakaushika) to help. As the sage meditated, a mango fell in his lap. He gave the mango to the king, who in turn gave half to each of his wives. They became pregnant. But when they delivered, each gave birth to half a child. They threw these misshapen globs of flesh outside the palace, where the rakshasi Jara found them. In putting them together as one perfect boy, she gave her name to him Jarasandha, “the one joined together by Jara.”
Jarasandha became a very powerful but wicked king. His two daughters were married to Krishna’s uncle, King Kamsa. When Krishna killed Kamsa, the daugh­ters went to their father, Jarasandha, and provoked him into attacking Krishna. Finally after more than eighteen battles detailed in the Mahabharata and the Bhagavata Purana, Bhima killed Jarasandha in a duel.