KALMASHAPADA – A king of the Ikshvaku dynasty 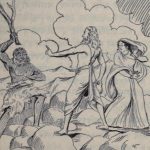 Kalmashapada (one with polluted feet) was the name given a great king who had been turned into a man-eating rakshasa (night-wandering demon). Before the curse, he was Mitrasaha, king of Ayodhya, who lived in happiness with his beau­tiful queen Madayanti. There are three versions of how he was cursed.
The first version began on a hunt when King Mitrasaha killed a tiger cub that was really a rakshasa. The demon’s brother took revenge by taking the shape of a brahmin named Vasishtha and going to Mitrasaha’s palace to perform an Ashvamedha (horse sacrifice). The rakshasa, in the form of the presiding priest Vasishtha, asked the king to fix him a meat meal and bring it to his tent. Unknow­ingly Mitrasaha took the meat meal to the real Vasishtha, and the sage cursed the king and transformed him into a rakshasa.
The second version began with a hunt and the accidental killing of a rakshasa. Again the brother rakshasa took the form of a brahmin cook. Vasishtha arrived, and a meal was needed for the sage. This time the cook prepared human flesh, and the king served it to the sage Vasishtha. Mitrasaha was cursed to become a man- eating rakshasa for twelve years. In the third version Mitrasaha was on a hunt. He met Shakti, the son of Vasishtha, on the trail. Both thought the other should step off the path. Finally, the king struck the brahmin with his whip. In anger, (Sakti cursed him, and another sage, Visvamitra, put a devil into the king’s body. The king immediately became a rakshasa.
In one account King Mitrasaha tried to get even with Vasishtha for cursing him. Mitrasaha took water and was going to throw it down with a curse. How­ever, the queen stopped him with the warning that it was not right to curse a brahmin. So he threw the “cursed water” on his own feet, thus acquiring the name Kalmashapada, “one with polluted feet.”
As a man-eating rakshasa, Kalmashapada was quite successful. He ate all one hundred of Vasishtha’s sons, including Sakti. Kalmashapada lived as a rakshasa for twelve years and had many adventures. Finally, at the end oftwelve years he was returned to his original form by the blessing of Vasishtha himself.