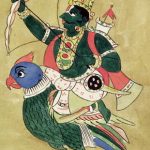 There are two versions of Kama’s birth. According to the Mahabharata, Kama is the son of Dharma, who was born from the right breast of Brahma. Dharma had three sons: Kama, Sama, and Harsha. All were very handsome like their father.
According to Kalika Purana, Kama was born from the mind of Brahma. Brahma created ten Prajapatis (progenitors) first and then an exceptional woman called Sandhya. When Sandhya was born, Brahma and the ten Prajapatis were very much attracted by her beauty. At that moment of excitement a handsome youth sprang from the mind of Brahma holding a bow of flowers and arrows of sugarcane. The youth asked: “Whom shall I make excited?” And Brahma answered that he should excite men with kama (love, desire).
Kama was blamed by many versions of the myth for Brahma’s creation of and marriage to Sarasvati. She was mind-born from the creator—from his meditation. But then Brahma fell in love and married his own daughter, Sarasvati. For this, he blamed Kama, who, Brahma said, had excited him with his magic arrows. So Brahma cursed Kama to be turned into ashes by the fire of the third eye of Siva. (For more see the entry on Parvati.)
Kama’s greatest moment was when he was sent by Indra to wake up Siva so that he could deal with Taraka, the great asura (demon) troubling the world. Siva was angry and burned Kama to a crisp. Kama’s wife Rati pleaded with Siva to restore Kama to life. But all that Ssiva would do was to give Rati a rebirth as mother of a reborn Kama who was reborn as Pradyumna. (See more in the entry on Rukhmini, Rati’s name when she was reborn.)