KRISHNA – Ninth incarnation of Vishnu; the Absolute itself 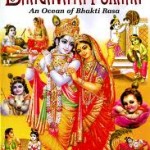 The Krishna myth cycle has been integrated in such a way that most Hindus do not know its real complexity. Some of its elements are very ancient, showing that many myths have come together to form modern versions. First, there was the Krishna myth of a divine king, possibly with tribal or even Dravidian roots. This Krishna, whose name literally means “dark” or “black one,” may have ele­ments of a historical figure from the first millennium before the common era. The Krishna of the Mahabharata, a warrior in most sections, but the incarnation of Vishnu in two of the epic’s appendices (the Bhagavad Gita and the Hari- vamsa), could be merged with the tribal Krishna into what scholars call the Vasudeva Krishna, son of Vasudeva, being both royal and divine. But without doubt, the most complex Krishna was found in the Puranas—especially the Bha- gavata Purana. Here we find Krishna as the divine baby and child, the amorous cowherd, the slayer of demons, and the victor over all forms of evil. This Krishna Gopala must be the most popular deity in India. And certainly for many, the mythic streams from the Epics and the Purana are harmonious. Finally, one must

Sri Krishna manifests in pure love, playing his magical flute in a call to devotion.
return to the Mahabharata for the aged Krishna, once again all too human, with stories of weakness and finally death. The stories selected from this wealth of materials could fit into all the mythic traditions of India, universalist or sectar­ian. The account given here will summarize the most widely accepted versions.
Krishna was born as the eighth son of Vasudeva and Devaki.  in their previous births were Kasiyapa and his wife Aditi. Another wife of Kasiyapa, Surasa, was reborn as Rohini, to fulfill the task of being the foster mother of Balarama, Krishna’s brother.
His parents’ complex stories are nested in Krishna’s birth narrative and employ one of the arch-villains of Hindu mythology, Kamsa, Krishna’s uncle, who tries repeatedly to kill him.
Krishna was born with four hands holding the signs of Vishnu (conch, dis­cus, club, and lotus). After instructing his father Vasudeva concerning past lives, Krishna revealed what needed to happen in this one. He then changed to a baby with more human characteristics. Vasudeva took Krishna and traded him with the baby who had been born to Nandagopa and Yashoda in the village of Ambadi. Vasudeva had to cross the Yamuna River, but it changed its course to aid in his mission. Once Vasudeva returned with the substitute baby, he reported the birth to Kamsa. The evil uncle raced to the prison cell and attempted to kill the incar­nation of Mayadevi as a baby girl, but she rose into the sky and spoke a chilling message: that the one who would kill Kamsa had already been born. Kamsa began a massacre of boy babies, so Nandagopa took Yashoda and Krishna as well as Rohini and Balarama and moved to Gokula.
Krishna spent his childhood in Ambadi (Gokula) amongst the Gopalas (“cow keepers”) and the Gopis (“female cowherds”), whose main profession was look­ing after cows, and selling milk and curd.
The childhood of Krishna was full of merrymaking and danger. He was attacked by many types of demons in the service of Kamsa: Putana, the nurse with poisoned breasts, whom Krishna sucked dry and left her dead; Sakata disguised as a cart, which Krishna kicked to pieces; Trinavarta who was invisible in a whirl­wind, whom Krishna weighted down and choked to death; and an almost endless assortment of demons, beasts, and snakes. Some of these he killed dramatically, others he subdued and then converted, like Kaliya, the giant water serpent on whose head he danced. He performed miracles such as lifting Mount Govardhana on his finger to protect the Yadavas, the local villagers, from Indra’s torrential rain, sent by Indra in retaliation because Krishna had encouraged the villagers to stop worshipping Indra. Thus Krishna earned one of his many names, Govinda, “one who lifted the mountain.” When his foster mother sought to catch him as the but­ter thief—or, some versions said, for putting dirt into his mouth, others, for eating sweets—he simply opened his mouth and showed her the entire universe.
Radha became his best female friend, though each of the Gopis thought that she was his favorite. Krishna was always accompanied by his brother Balarama, who had been brought to Gokula by the sage Garga. Their play (lila) with the Gopis during this period became the subject of an extensive literature on devo­tion and love. On the surface it was highly erotic, including pranks like stealing the clothes of the Gopis and making them come before him and beg, and calling all the women into the forest for lovemaking, even multiplying himself at least on one occasion so that each of them could have their own Krishna. The Gopis were even called the 16,008 wives of Krishna. But good mythology, like good theology, has many levels of meaning—and at the deepest level that kind of love- making has been seen as pointing to a devotional relationship that risks every­thing for a personal experience of Krishna’s presence and grace: loving, total, dangerous, and so much more.
By way of balance, Krishna also lived as a student (brahmachari) in the asrama of the sage Sandipani—following the orthoprax Brahmanical stages of life (asrama-varna-dharma). Ready to perform their divine mission, Krishna and Balarama traveled to Mathura for the fateful encounter with Kamsa. There they killed Kamsa, and released Vasudeva and Devaki from prison.
Kamsa’s death was said in some accounts to have been necessary to deny Ravana his most powerful ally for the Rama-Ravana war. However, unraveling the nested myths in the Rama myth cycle is another problem; Krishna’s purpose for incarnation did not end with his cosmic victory of evil, personified in Kamsa, but was prolonged in a sagely way as chariot driver for Arjuna in the great Bharata war. Krishna helped Draupadi, joint wife of Arjuna and his brothers, when she was assaulted by Dushshasana, son of Duryodhana, leader of the Kau- ravas. On the Kurukshetra battlefield Krishna advised Arjuna about his duty and even manifested himself as the Supreme. After the Pandavas won the great war and set up their rule, the Yadava dynasty, to which Krishna belonged, declined and was finally destroyed by internal strife. Krishna’s death was told from a number of points of view. The most widely accepted is that the real reason for his death was that his mission as an incarnation was over. So one day he was sit­ting on a branch in a tree. A hunter mistook the sole of his foot for a bird and shot him with a poisoned arrow. (His foot was the only spot not protected by the magical potion of Durvasa.) So Krishna died and ascended to svarga (heaven) and merged again into Vishnu.