KRITTIKAS – Goddesses; the Pleiades, wives of the seven sages (sapta-rishis) 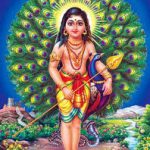 Six of the wives of the seven sages, known as the maharishis, were suspected of committing adultery with Agni and were cursed to become the Krittikas, star sisters of the Pleiades. Astrological symbolism resides in this myth, giving an idea of what was observable at that time in the heavens. Mythologically there was ambiguity about their becoming stars. Some versions implied that this fate was a reward for their nursing the creation of (Siva, as Subrahmanya, while other versions made it a punishment. Also the paternity of Skanda as Subrahmanya, the fierce warrior, was questioned, with some myths stating that Agni was his father instead of Siva and the six Krittikas were his mothers.