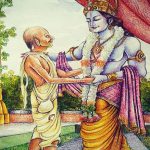 Kucela was a fellow student with Krishna of the sage Sandipani. They were close friends as students, but lost contact in the following years. Kucela could not provide for his large family, and all were on the verge of starvation. One day his wife sent Kucela to visit Krishna with only a small package of rice as a gift—their last food. Krishna accepted the rice and ate a handful. Perhaps Krishna forgot to provide a feast for Kucela as they became engrossed in their renewed friendship, and perhaps Kucela forgot his mission to seek help for his family. (The various versions are rich with different details.) But the visit came to an end, and Kucela was almost home when he realized that Krishna had not given him anything to take back to his family. However, when he reached the place where once his miserable hut was, Kucela found a palace. Krishna had abundantly provided for his every need. Thus, Kucela, the friend of Krishna, became known as Sudaman, “the one upon whom [Krishna] bestowed abundantly.”