MAINAKA – A mountain in the Harivamsa 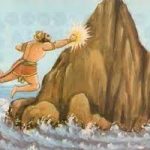 There was a time when the mountains could fly. When they came to earth, they caused injury and suffering. Humans prayed to Indra, and he cut off the moun­tains’ wings.
The mythic tradition used Mainaka in a variety of ways without much regard to an actual location. Mainaka was the son of Himalaya and was rescued by his friend Vayu, the wind god. Mainaka lived according to one account in the ocean. Thereby Mainaka helped Hanuman, the great monkey god and servant of Rama, cross the ocean on his way to Lanka to save Sita. In another accountMainaka was the mountain on which King Bhagiratha practiced the austerities (tapas) that convinced Siva to bring the Ganga to earth.