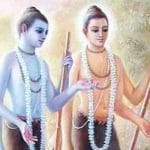 Nara was one of the four sons of the god (deva) Dharma. Dharma-deva had been born from the breast of Brahma. Dharma-deva married the ten daughters of Dak- sha. His four sons were Nara, Narayana, Hari, and Krishna. Nara and Narayana became great ascetics, practicing severe penances. They stayed in the Badarika asrama doing tapas (austerities) for a thousand years. Hari and Krishna became great yogis.
In the battle after the Churning of the Milky Ocean Nara and Narayana helped the devas defeat the asuras (demons). Indra entrusted Nara with the task of safeguarding the pot of nectar (amrita) won in that contest.
During the destruction of Daksha’s sacrifice (Daksha yaga), Siva‘s trident went astray and sailed all the way to the asrama (hermitage) where Nara and Narayana were meditating. It hit Narayana in the chest. Narayana used the sound Hum to eject it and send it back to Siva. When Siva came to destroy the two sages, Nara created an ax from a piece of grass and stopped Siva’s destruction.
Once there was a contest with the asura king Prahlada. Nara and Narayana both used their divine bows and arrows, but it was Narayana who finally defeated Prahlada. And it was Prahlada who realized that he had been in a con­text with Vishnu. A stanza in the Mahabharata said that Nara was one of the four incarnations of Vishnu in the Manushya Yuga of the Svayambhuva Man­vantara (first age of the first cosmic cycle).
According to the Devi Bhagavata Nara and Narayana were reborn as Arjuna and Sri Krishna in the Dvapara Yuga (the third age of this cosmic cycle)— because of a curse of the sage Brighu.