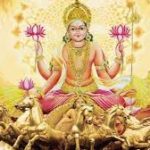 Pushan was the son of Surya, the sun, or an aditya, a son of Kashyapa (a progeni­tor) and Aditi. He was reduced in later mythology to a guardian of the roads, to toothlessness, and to an eater of gruel.
Pushan was an early Vedic god (deva) who was connected with Bhaga (god of inheritance). At the earliest level Pushan was a god of fertility, associated with semen and with the offering of soma (the divine nectar). His name implied that he was a nourishing god, and there seemed to be an early cult conducted by those who worshipped him because he was believed to make them prosper.
Pushan’s deeds and epithets came to be appropriated by Surya. Before he faded from importance after the Vedic period, his guarding of the roads implied his protection on the final road to heaven