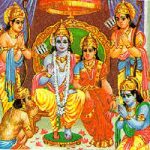 The Ramayana is one of the two great Epics of Hindu mythological literature. The other is the Mahabharata. The Ramayana was said to have been authored by the sage Valmiki. The Ramayana dealt with the story of Sri Rama and Sita.
The Ramayana is divided into two sections, the first with six books (kan- das) and the second with one. The first and seventh books are believed by most scholars to have been added later to the original. The traditional view in India, however, is that the whole was created by Valmiki, even though there were three recensions, none of which contain more than two-thirds that is common to the others. Tradition places its action in the treta yuga, or second age of this era. That means that the events of Rama’s life preceded those of Krishna’s, that he made his appearance as an avatara (incarnation) of Vishnu before Krishna. Scholars have noted much borrowing of themes and mythic solutions from sto­ries about quite different figures or characters.
The Ramayana gathered folk tales of a local prince Rama of Kosala who had been sung about for centuries by martial bards. He was a perfect warrior. The lit­erary retellings of the Rama myth by the poets—Valmiki, Bhasa, Kalidasa, andIn the epic Ramayana Hanuman serves Rama with pure devotion. (TRIP)

Bhavabhuti—were more secular than religious, more heroic than ascetic, and all quite tragic. By about the twelfth century the vernacular and regional poets like Ramayanas and Tulsidas had transformed not only Rama into the supreme lord but all elements including Ravana into loving devotion (prema bhakti). Every­thing had become an allegory of devotion, harmony, and bliss.