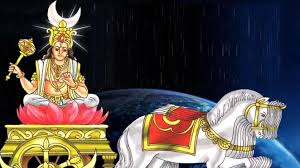 This entry will focus on Soma as the plant and Vedic drink. For more information about Soma as a deva and as the moon, see the entry on Candra. In the Vedic period Candra, the moon, and Soma, the entheogenic (religious experience-inducing) plant, were connected by associa­tions (bandhus) in the early hymns.
Mythologically, Soma emerged from the Milky Ocean in a pot, a process made possible by the Kurma incarnation of Vishnu and Vishnu’s shape and gen­der shifting as Mohini. Soma was the drink or nectar of immortality (amrita), fought over by gods and demons, but eventually brought from heaven by an eagle (syena), later said to have been Garuda (vehicle of the god Surya).
Ritually, soma was at the very center of Vedic ceremonies, offering suste­nance and energy to the devas and ecstasy to brahmins. The bird delivering soma was associated with the gayatri, Vedic religion’s most sacred mantra, the verse with three eight-syllable padas (feet). Some hymns gave the impression that soma was purchased from a rustic dealer who was paid and ceremoniallydriven away, reenacting the primor­dial combat between gods and demons or the conflict of the demons with the later guardians of soma, the gandharvas.

Soma and Agni were linked in this cult of ecstasy. Soma was “king,” and Agni took Soma to the devas. Often the hymns referred to them as combined or symbolically united.
Soma was not fermented or dis­tilled. Priests pressed or extracted soma by pressing stalks between stones into a wooden bowl. They used wool to filter the juice and may have mixed it with clarified butter (ghee). The most famous soma rituals were the consecration of the king (Raja- suya), the horse sacrifice (as’va- medha), the “drink of power” ritual (Vajapeya), and various fire rituals (Agnistoma). The gods had come to depend on earthly priests to pour soma into the ritual fire and on Agni to bring their shares to heaven (svarga). Buddhists ridiculed this belief, saying that if they believed that Agni could take something to heaven, they should jump into the fire themselves.
Many scholars think that the real soma could not be easily obtained in the lower altitudes and hot climate away from the Himalayas, and a few centuries before the time of the Buddha soma was only a memory in the rituals. Conse­quently, the priests’ ritual ability and the rituals themselves became all important. The belief in the power of ritual (maya) rose, along with the belief in the power of austerities (tapas).
There were several psychedelic, hallucinogenic, or entheogenic cults in the ancient world, many associated with divine mushrooms: Avestan haoma, Greek ambrosia and nectar, Chinese ling-chih, a mushroom of immortality. Soma is viewed as such an entheogenic or psychedelic, principally on the work of Was­son and O’Flaherty. It is not universally accepted that soma was the mushroom fly agaric since this mushroom could only be found at 4,000 feet above sea level or higher. However, this very fact would account for its scarcity and finally its loss.
Certainly at its peak soma was central to Vedic rituals, as many hymns in the Rigveda and the entire Samaveda dedicated to it attest.