DEVAKI – Daughter of a Yadu leader and mother of Sri Krishna 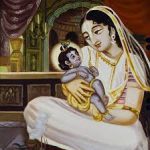 Devaki was said to be the rebirth of Aditi, the mother of the devas and wife of Kasyapa-prajapati. She was more famous as the mother of Sri Krishna. (Vishnu pulled two hairs from his head, one white, another black, and implanted them in the wombs of Rohini and Devaki. Each divine fertilization became a full incarnation of Vishnu.)
One account stated that Devaki held a svayamvara (the self-selection of her husband by a ksatriya princess) in which she chose Vasudeva. At their marriage a voice from heaven announced that her eighth child would kill Kamsa, her brother. Kamsa drew his sword and would have killed her, had not her husband Vasudeva pledged to give him each of the sons when they were born. So began intermittent imprisonments of the couple and the killing of their first six sons, who were being reborn to work out karma going all the way back to their sin of mocking the cre­ator.
Kamsa personally bashed the brains out of each baby boy. Kamsa’s rule of Mathura became more and more evil. Some versions of the myth tell of the sev­enth child as an incarnation of Mayadevi. Even though the seventh birth was not a boy, Kamsa tried to smash her head against the ground. But she rose into the air and announced that Kamsa’s death was near.
Another version made Balarama the seventh child. Devaki’s womb became a divine way-station for BalaRama on his way to Rohini to carry him until his birth as the seventh avatar of Vishnu. This makes these incarnations compli­cated theologically, since there were two full incarnations of Vishnu on earth at one time.
Finally, Krishna was born as her eighth child, and in due course fulfilled the prophecy that he would kill Kamsa.
Devaki’s rebirth as Prishni, wife of Sutapas (a prajapati, or progenitor), seems to have been an example of inattention by the mythmaker. They placed her back in time without any explanation of the karmic necessity for such a story. Devaki had other such roles without development of character or purpose except for the use of her name.