Skip to content
Home Hindu Mythology GAVIJATA – Son of a sage, who cursed a king

GAVIJATA – Son of a sage, who cursed a king 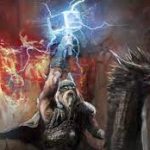 In the Devi Bhagavata the sage Nagabhushana (“one having snakes as his orna­ment,” a sage whose name was a pun, pointing to the object of the story, Siva) was deep in meditation at his forest hermitage. King Parikshit, grandson of Arjuna, came to him desiring water after a long hunt. But Nagabhushana did not respond. Parikshit put a dead snake on the sage’s neck, but there was still no response. The king returned to the palace thirsty. Nagabhushana’s son, Gavijata, was teased by companions that his father really was “one having dead snakes as his ornament.” The son immediately cursed the one who had done this to be bit­ten by the king of snakes, Takshaka, and die within seven days. When Gavijata learned what the king’s provocation had been, he went to the king and warned him of the curse so that there might be countermeasures. But Parikshit stated that he was ready to die when the time for death came.