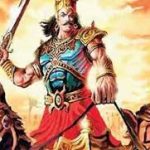 Parikshit had a miraculous birth. At the very end of the war told of in the Mahabharata, one of the last surviving Kauravas launched the magical weapon of Brahma (a Brahmashira) to exterminate all of the Pandavas, but Arjuna had an equal weapon that he launched to defeat it. However, the future Parikshit‘s preg­nant mother was struck in the abdomen by the Kauravas’ terrible weapon. She barely survived, and Parikshit was killed in the womb. Krishna cursed the attacker for his evil deed. When Parikshit was stillborn, his mother Uttara pleaded with Krishna to give life to the child even though it was three months premature. Krishna did, and Parikshit came to life.
Parikshit grew to manhood, married princess Madravati, and by her had four sons. Because Yudhishthira abdicated rather than rule his destroyed kingdom, Parikshit was enthroned as the King of Hastinapura, the grandson of Arjuna, and one of the last Pandavas of the candra-vamsa (lunar royal line).
Parikshit loved hunting. One day after a long and tiring hunt in the forest, he came upon a hut and asked an old man for a drink. The old man, however, did not move. So the king threw a dead cobra on him. Still, the sage sat totally silent, not aware of his presence or that of the snake. The king returned to his palace. There are a number of variations at this point in the story. The sage’s son, Samika (or Gavijata or Sringi), was teased by other brahmin boys or came home and discovered the perceived insult to his father. In any case, Samika was offended by the joke and put a death curse on King Parikshit: he had only seven days to live.
In another variant the son of Nagabhushana (“one having snakes as his ornament,” i.e., Siva), Gavijata, was teased by companions that his father was really “one having dead snakes as his ornament.” The son immediately cursed the one who had done this: he would be bitten by the king of snakes, Takshaka, and die within seven days. When he learned the circumstances, he went to the king and warned him of the curse so that there might be counter measures. But Parikshit stated that he was ready to die when the time for death came.
In yet another variation Parikshit had his engineers build a new palace on a pillar in the middle of the ocean with psychics and yogis protecting him. The giant serpent Takshaka made a final attempt on the seventh day. Disguised as an old priest, Takshaka met Dhanvantari, the physician of the gods, on his way to protect the king. After they became friends, Dhanvantari returned home. Tak- shaka changed his shape and entered an apple being taken to King Parikshit. When the king picked up the apple, Takshaka changed into his true shape and size and killed Parikshit instantly.
The king’s son Janamejaya sought revenge and attempted to rid the earth of snakes by doing a great snake sacrifice (Naga yaga). Parikshit did not attain heaven (svarga) when he died, so the sage Narada advised Janamejaya to do a sac­rifice for the salvation of the spirit of his father (amba-yaga). The sacrifice required many brahmins, who were all richly rewarded with gifts. Narada announced at the end of the yaga that Parikshit had attained a seat beside Devi in heaven.