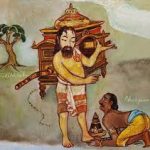 This is a Puranic myth about dharma a father who failed to keep his dharma and sons who kept theirs. Jada was a brahmin who became an unscrupulous businessman. But he was robbed and killed and reborn a pisaca, a hunger ghost. His sons were quite moral and did their duty toward their father. They decided to go to Kasi (Benares) to perform proper rituals for the spirit of their father. As they recited the third chapter of Bhagavad Gita, their father’s angry spirit was redeemed from its state, and Jada was able to be reborn as a human.