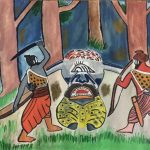 In the Rama myth cycle in his previous life Kabandha was a Gandhara called Visvavasu. He was born to a gandharva called (Sri Visvavasu, who was also known by the name Danu. Visvavasu performed a penance (tapas) and received the boon of immortality from Brahma. Arrogant about this boon, Visvavasu then attacked Indra. In the great battle that followed Indra used his divine discus (Vajrayudha). The head and thighs of Visvavasu were squeezed into his body, and his mouth was pushed down to his abdomen. Upon Visvavasu’s pleading, Indra gave him two long hands and said that he would regain his original form when Sri Rama cut off these hands. Because he did not have a head, only two long hands and a mouth on his belly, he came to be known as Kabandha, “the headless.” Often he was depicted as a tree.
The fateful day came when Kabandha encountered Sri Rama and Lakshmana in the forest. They were searching for Sita. Before them appeared the hor­rible form of Kabandha, large as a mountain. The demon grabbed Sri Rama in his right hand and Lakshmana in his left. Each cut off one hand. Kabandha then told them his story and fell dead. Sri Rama and Lakshmana burned his body on a funeral pyre, and as Kabandha ascended from its flames, he told Sri Rama and Lakshmana to go to Sugriva, the monkey king, from whom they could learn more about Sita’s abduction. Kabandha was again Visvavasu, a gan­dharva king.