Home Hindu Mythology KASYAPA – A prajapati (progenitor) who fathered all beings; a sage

KASYAPA – A prajapati (progenitor) who fathered all beings; a sage 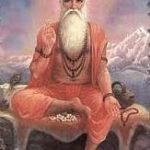 Kasiyapa-Prajapati has a major role in creation. However, there were variations concerning his birth and his status. In the Mahabharata Kasiyapa was only the son of Marici, who was one of the six mind-born sons (manasa-putras) of Brahma. The Valmiki Ramayana added Kasiyapa as the seventh and youngest sons of Brahma and thus a brother of Marici. Thus, Kasiyapa was either the son or grandson of Brahma.
As chief of the prajapatis, Kasyapa was the primary progenitor of this creation. Kasiyapa married twenty-one daughters of Daksha (See entry on Daksha to see how the mythmakers saw Daksha as an aditya, thus a son of Kasiyapa, or born from the thumb of Brahma.) Kasyapa was the father of both the devas (gods) and the asuras (demons). His more important wives were Aditi, whose children were the adityas (gods, devas), and Diti, whose children were the daityas (demons, asuras). His main daitya children were Hiranyakasipu, Hiranyaksha, and Simhika. Kasiyapa’s wife Danu gave birth to the Danavas: Kapila, Sankara, and Taraka were among those who gained fame. Surabhi gave him another order of children including Rudra (a storm god) and Tvashthri (the divine architect). Vinata gave birth to Garuda (king of the birds) and the bird kingdom, while Kadru became mother of the Nagas, the serpent kingdom.
There were an astonishing number of appearances and roles that Kasiyapa was given in late myths. These are distributed over three rebirths. In the Cak- shusha Manvantara he was the sage Sutapas and married to Prishni. After twelve thousand years of austerities he won Lord Vishnu’s promise that Vishnu would be born as his son. In the next Manvantara of Vaivasvata Manu, Sutapas and Prishni were reborn as Kasiyapa and Aditi, and Lord Vishnu was their son as Vamana-deva. Surasa was one of Kasiyapa’s wives in that lifetime and was reborn with him in his next rebirth. Then in the next lifetime these three— Kasyapa, Aditi, and Surasa—became Vasudeva and his two wives, Devaki and Rohini.