KUNTI – Mother of the Pandavas and wife of King Pandu 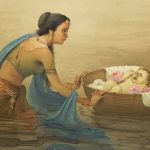 Kunti was the aunt of Shri Krishna, mother of the five Pandavas and a sixth son Karna, and wife of King Pandu. Kunti was a heroine of the Mahabharata. As a child Kunti was given to a royal cousin, King Kuntibhoja, who was childless. She was given responsibility over religious arrangements in his palace. That was when she met and served the powerful brahmin Durvasa. In his gratitude for her devotion, Durvasa gave her a magical incantation that had the power to mani­fest any god upon whom she was thinking and allow her to have a child by him. She could not contain her curiosity to see if it worked and chanted the mantrafocusing of the sun god, Surya. How gentle Surya was, assuring her that she would not even lose her virginity by having a child with him. So they conceived Karna, and only with the help of her stepmother was she able to hide her preg­nancy. When she gave birth to this exceedingly handsome baby, Karna, he was immediately placed in a box and sent afloat down the river Asiva, on into the Yamuna, and then into the Ganga. The box was pulled from the river by Adhi- ratha, charioteer of King Dhritarashthra, and taken to his childless wife Radha. So Karna was brought up by these foster parents in the country of Anga.
Some accounts said that Kunti chose her own husband in a svayamvara, wed­ding of her own choosing, but others more logically stated that she was married to the pale old King Pandu, to strengthen military alliances. Pandu soon took a second wife, Madri. Versions differ about Pandu’s age and health and whether or not he was cursed for killing a brahmin who was making love with his wife in the form of deer. According to that version, a death curse had been placed on him: if he made love with his wives he would die. In both versions, the result was the same: both wives were childless, and he tried to get his wives to have sons by some noble person. It was then that Kunti remembered her boon from Durvasa. With Pandu’s blessing, Kunti used the mantra three more times for herself, hav­ing Dharmaputra (Yuddhishthira) by Dharma-deva, Bhima by Vayu-deva, and Arjuna by Indra-deva. Pandu wanted his wife Madri to have children as well, so Kunti gave her the last use of the fivefold boon. Madri wisely focused on the Asivins and had twins by them. That winter in exile in the forest Pandu forgot about the curse, made love with Madri, and instantly died. Both wives would have joined him on his funeral pyre (sati), but the priests insisted that one of them must live to care for the little baby boys. So Kunti lived to raise both sets of sons, known as the five Pandavas, in the palace at Hastinapura with her husband’s brother, King Dhritarashthra, his wives, and their hundred sons, the Kauravas.
Eventually this arrangement brought out too much rivalry between the cousins, and Kunti and her sons, the Pandavas, moved to the Lac palace at Varana- vata. When it was set aflame in an attempt to kill all of them, they escaped through a secret tunnel and went into hiding. Each time an attempt was made to reconcile the brothers with their cousins more conflicts, deceits, and suffering occurred. Through it all Kunti tried to mediate between the Kauravas and the Pan- davas. After the great Bharata war Kunti helped all the others in their grief over the enormous losses of so many of their kin. She then went with Dhritarashthra and his wife Gandhari into the forest on the banks of the Ganga. There they practiced stern penances, taking food only once a month, until they all died in a forest fire. Kunti, joined by Madri and Pandu, then entered Devaloka (heaven).