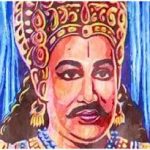 Even before his birth, Nausha has been proclaimed as the one to kill the demon (asura) that attempted to violate Parvati‘s “wish-born” daughter, Asiokasundari.
In the Epics and Puranas Parvati had been taken to the most beautiful gar­den in heaven by Siva in the midst of their love play (lila). Parvati saw the kalpa tree (Kalpa vriksha), the wish-fulfilling tree, and wished Asokasundari into being. Asiokasundari grew into a beauty who became the object of desire of an asura named Honda. He attempted to molest her but was cursed to be killed by Asokasundari’s mortal husband-to-be, the yet-unborn Nahusha. Hunda then attempted to kill Nahusha in his mother’s womb.
There was a birth in the Tantras that can be sometimes nested within the story of Nahusha. It involved a blessing from the sage Dattatreya, who was served by King Ayus for a hundred years in order to obtain a son—Nahusha. King Ayus was given a magical fruit for his wife after he gave the sage meat and liquor in a skull. Queen Indumati ate the fruit, and Nahusha was born. Hunda stole the baby boy, planning to eat him and so obtain the power of the fruit, but through a series of mistakes missed getting to eat the baby. Instead Nahusha was raised by the sage Vasishtha. Good old sage Narada showed up to tell the grieving par­ents that their baby was fine and would return at the right time. Hunda tried to kill Nahusha many times, but all his attempts failed. Hunda was finally killed by Nahusha. Then, Nahusha married Asokasundari and to them was born the famous Yayati, a future emperor. They also had a hundred beautiful daughters.
An additional Puranic story illustrated an old theme: that too much power and success could spell trouble. The great King Nahusha was needed in heaven to rule in Indra’s absence. But Nahusha desired Indra’s wife Indrani and was cursed by the sage Agastya for his sin. Nahusha became a python in the very for­est of the exiled Pandavas. Nahusha was released from the curse once he met them. Then he returned to Indra’s heaven.
Nahusha’s great-grandsons became the Yadava dynasty, so important in the Mahabharata.