NAKULA – The fourth of the Pandava brothers of Mahabharata fame 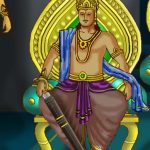 Nakula and his brother Sahadeva were born to King Pandu and his wife Madri. However, their birth was not normal—a curse prevented Pandu from touching his wives on pain of death, and a magical incantation had allowed their mother to have twins by the Asvins (the twin divine physicians). Some texts made them incarnations of the twin gods. (For more details about their birth see entry on Kunti.)
Nakula, like Arjuna, was a great archer. To Nakula and Draupadi, the Pan- davas joint wife, was born a son named Satanika. Nakula had another son named Niramitra born to his second wife, Karenumati. Karenumati was the daughter of the king of Chedi. During a year of incognito stay in the kingdom of Virata, Nakula assumed the name Granthika and looked after the royal horses along with his brother Sahadeva.
Nakula defeated many great kings in the Mahabharata war. He even defeated his teacher, Dronacharya, but did not kill him, as he was a brahmin. A few years after the Kurukshetra battle, the five Pandavas retired to the forest (their mahaprasthana, great pillar). Nakula and Sahadeva died on the long jour­ney that the brothers undertook to heaven, but they were able to go directly, returning in some versions to their original form as the Asivin twins.