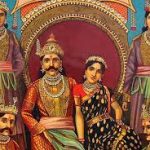 Draupadi was the princess of Pancala (thus her name Pancali) who held a contest to choose her own husband (svayamvara). Arjuna competed in disguise because he and his brothers had been exiled from their kingdom of Ayodhya. Arjuna, son of Indra and Kunti, won the contest and took her away with him. When he announced to his mother that he had won a great prize, she declared that the prize must be shared equally with his brothers as always. Thus, Draupadi became the joint wife of the five Pandava brothers, although Arjuna always remained her favorite.
Draupadi was treated as property in Yudhisthira’s famous gambling match with Duryodhana and lost twice to him. The second time Dushshasana, Duryodhana’s son, dragged Queen Draupadi into the Kauravas’ great assembly hall and tried to disrobe her in front of her defeated husbands and the other members of the palace. She was helped by Krishna and saved from humiliation as her sari became unending. Draupadi vowed not to comb her hair until this humiliation was avenged.
Back in the forest Draupadi did not complain as each of her husbands acquired more wives and kept strange schedules. Bhima honeymooned with Hidimbi, his rakshasa bride, during the day and each night returned to be with Draupadi. Arjuna went off for a year as a punishment for bursting into her bed­room when it was not his turn, acquiring wives and sons from his adventures. During the exile she may have been raped by a kinsman, King Jayadratha. Then she was so abused by a general named Kicaka that Bhima killed him and then had to rescue Draupadi from being burned to death as punishment for that killing.
Bhima had vowed to avenge the humiliation of the Pandavas’ joint wife Draupadi caused by Duryodhana. He finally kept that vow by mortally wound­ing Duryodhana with a blow from his war club.
On the eighteenth day of the Mahabharata war Draupadi and her five sons visited the Pandava encampment, anticipating that the war was finally over. That night Asvathaman and two warriors slaughtered most of the Pandava army, including Draupadi’s five sons—one from each of her husbands. Draupadi wanted revenge but allowed her husbands a way out of slaying a brahmin. They only had to bring back the jewel Asvatthama wore. Bhima, Arjuna, and Krishna pursued Asvatthama and brought back his jewel to Draupadi.
With the end of the war the Pandavas regained their kingdom, only to find that they had no heart to continue as the royal family. When Yudhishthira, old­est of the Pandava brothers, renounced his kingdom and began the journey to the Himalayas, Draupadi and her other four husbands joined him. Draupadi died on the way, but she was waiting in heaven (svarga) when Yudhishthira finally arrived.
Draupadi has been honored as one of the panca-kanya, the five ideal women of Hinduism, being seen as one who lived her svadharma—all of life’s obliga­tions that she was responsible for observing.