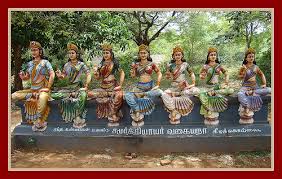 The collective name of the seven divine mothers—seven (saptan) mothers (matris or matrikas)—has been associated with Siva both in mythology and iconography. The Brahmanical view in the Mahabharata depicted them as destructive female energies responsible for ill fortune and disease and especially attracted to harming children. The mothers were assimilated into both the Siva myth cycle and that of Devi, the Great Mother. Aspects of the mothers are appropriated by Kali and Durga, while Camundi (or Camunda) simply became a dangerous manifestation of Devi.
In the episode of the demon Andhaka coming to Kailasa to steal Parvati, Siva wounded him with an arrow, but from the squirting blood arose thousands of secondary Andhakas. So, Siva created a Sakti named Yogeshwari, while the other gods created the seven matris, named Brahmani, Vaishnavi, Maheshwari, Kaumari, Varahi, Indrani, and Camundi. The Varaha Purana stated that there are eight Matrikas—counting Yogeshwari in the group. It stated that they were personifications of evil (in the form of desire, anger, covetousness, pride, illu­sion, fault-finding, gossip, and envy). In the Kurma Purana Siva sent Bhairava (his own fierce energy or his son) and the Matrikas to hell (Patala).
Iconographically, the sapta-matrikas appear at the base of many important Saivite cave and temple sculptures—such as Ellora, Belur, and Kumbakonam.