KALI – The son of Kasyapa and his wife Muni 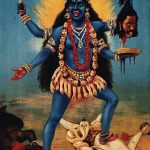 Kali (strife) was the personification of evil (adharma), as well as the worst throw in a game of Indian dice. He could also be called the god of sin and of bad luck. Kali was born as the fifteenth of sixteen sons of Kasyapa and his wife Muni.
In an encounter with King Parikshit, Kali was cursed to be confined to five places on earth: gambling, drinking, woman, murder, and gold. According to the Bhagavata Purana Kali is the ruling power in the Kali Yuga the present age.KALI

Kali, Hindu goddess of destruction, in an Indian painting from the nineteenth century (The Art Archive / Victoria and Albert Museum London / Eileen Tweedy)
A goddess (devi); the anger of Uma, or Parvati In the Vedic period Kali (the black one) was one of the seven tongues of Agni, god of the sacrificial fire. She was the black fire, though the specific meaning has been lost. She was referred to as one of the seven mothers of Agni—who nurtured him. There were also seven mothers (Matrikas) whose natures seem far from Vedic rituals. Yet as she devel­oped Kali seemed to combine both orthoprax Brahmanical religion and the heteroprax religion of the cremation grounds. She was the dark side of Devi, the Great God­dess (Mahadevi), assimilating tribal and non-Aryan god­desses and their myths.
The “hottest” (least orthodox) of all the manifes­tations of Mahadevi is Kali.
She is the anger of Uma, or Parvati, Siva‘s wife. She demands offerings of wine, meat, and blood. Animal sac­rifices are still performed to
her at her temples in Calcutta, in Nepal, and in the villages in non-orthoprax rit­uals. At the village level any of the hot goddesses may be seen as Kali—Camunda who drank up the blood of the demon Raktabija (bloody seed), whose blood was the seed of more demons; the Sapta-matrikas (seven mothers); and even lesser goddess of smallpox and disease like Sitala and Mariyamman. For many Kali and Durga are synonymous. Both have a lion as their vahana (vehicle), both kill Mahisha, both are goddesses that dance on their husband, Siva.
In some myths Kali appears as a voluptuous woman enticing bothdemons and wicked warriors—only to reveal herself as an opponent who beheads men almost as a whim. Only male offerings can be presented to her and beheaded in her blood sacrifices. It is no secret that she symbolically cas­trates her victims.
In Tantra Kali’s worship embraced the five pollutants, known as the “five m’s” (pancamakara)—madya (wine), matsya (fish), mamsa (meat), mudra (parched grain), and maithuna (sexual union). These could be utilized symboli­cally in right-handed worship (dakshinacara) or trangressively in left-handed worship (vamacara). Worship of Kali was dangerous, as her many bloody myths warned, but the rewards could be great.