KALINDI – A river and a goddess (devi) 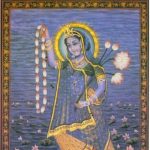 Kalindi was the daughter of Surya, the sun god. She was blessed to become a sacred river, also known as the Yamuna. It flowed from the Kalinda mountain and entered the Ganga at Prayaga, a very sacred confluence.
At the birth of Krishna, his father Vasudeva had to switch the infants of his two wives. He had to cross a flooding Kalindi River. The goddess of the river miraculously helped him cross back and forth with the babies.
There is a strange story in the Bhagavata (Skandha Ten) about Balabhadra Rama, Krishna’s brother and a divine incarnation in some lists, and the Kalindi. Balabhadra Rama had had a little too much liquor to drink and was playing with the cowherd girls (gopis). He wanted to swim with them so he had to pull the Kalindi over to them with his plough.
The Bhagavata Purana stated that Krishna and Arjuna were walking together along the Kalindi and saw a beautiful woman, who turned out to be Kalindi herself, practicing austerities (tapas). Arjuna learned that she was doing these in order to gain Krishna as her husband. When Arjuna told Krishna, Krishna took the goddess Kalindi in his chariot to Dvaraka and married her. Krishna and Kalindi had ten sons.
There was a story in Vamana Purana saying that Kama-deva (the god of love) shot some of his love arrows at Siva, when Siva was very depressed over the death of Sati. Ssiva became so excited that he jumped into the river Kalindi—and that is why its water is black. In Agni Purana the goddess Kalindi was depicted as black in color and riding on a tortoise, carrying a water pitcher in her hand.According to Padma Purana the river Kalindi was so holy that to drink her water or bathe in her divine flow would purify anyone from their sins and give them the merit (punya) to gain heaven (svarga).