DURYODHANA – The eldest of the Kaurava brothers and an arch villain 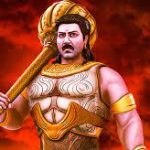 Duryodhana’s birth was a miracle from Siva, assisted by a blessing from Vyasa. (See account under Dhritarashthra.) Duryodhana was raised in the palace of King Pandu, who reigned because his blind brother Dhritarashthra was disqualified by his infirmity. When Pandu died, his oldest son Yudhishthira became king. Duryodhana and his ninety-nine brothers had trained in the martial arts with their five cousins, the sons of Pandu, or Pandavas. However, jealousy grew into hatred, and Duryodhana turned into one of the arch villains of Indian literature and myth. The sheer length of the Mahabharata, the world’s largest epic poem, pro­vided dozens of lengthy episodes that illustrated his deceit, cruelty, and malice.
Duryodhana was also a clever opponent of the Pandavas. On one occasion, with the help of his uncle Sakuni, Duryodhana led Yudhishthira into a gambling match that ended with the loss of his kingdom and even of the wife he shared with his brothers, Draupadi. Dushshasana, Duryodhana’s son, dragged Queen Draupadi (also know as Panchali after her birthplace) into the Kauravas’ great assembly hall and tried to disrobe her in front of her defeated husbands and the other members of the palace. She was helped by Krishna and was saved from humiliation. It was the miracle of the unending sari.
The Pandava brothers and their joint wife Draupadi were forced into exile and after the agreed-upon thirteen years returned in the fourteenth to reclaim the kingdom, but Duryodhana refused to give it up. So the hundred Kaurava brothers, led by Duryodhana, and the five Pandava brothers assembled their armies. Duryodhana asked Krishna to join on his side, but Krishna gave him the choice: either Krishna or his army. Duryodhana took the army, and Krishna joined the Pandavas as Arjuna’s chariot driver. The battle involved great slaugh­ter, but it eventually went badly for the Kauravas. On the eighteenth day they were routed, and Duryodhana fled the field of battle and hid in a lake. He had the miraculous power of surviving under water. He was discovered and forced to fight in single combat with Bhima, the giant Pandava. Duryodhana was win­ning, but Bhima, remembering his vow to avenge Draupadi’s humiliation, struck Duryodhana below the waist, a dishonorable act. Duryodhana was left to die, but three of his army found him—the very last survivors of his great army. That night the survivors went into the Pandava camp, murdering many and bringing back the heads of five Pandava grandchildren. Duryodhana mistook these for the heads of the five brothers whom he so hated. He asked for the head of Bhima and when he found that he was able to crush it, he knew the decep­tion. His dying words condemned the loss of life of innocents. He had died a “good fighter” (suyodhana).
One interesting reversal came at the end of the story of Yudhishthira’s long quest to reach heaven. Yudhishthira found that Duryodhana, his enemy and cause of so much of his and others’ suffering, had reached heaven years before. Duryodhana had done his duty (dharma) and for so doing had been granted his place with Brahma. DUSHYANTA
A king of the mythical Puru dynasty
King Dushyanta was on a hunting expedition in the forest when he found a woman of extraordinary beauty named Sakuntala. She had been raised by an old sage named Kanva in his forest hermitage. However, (sakuntala had another sage as her father, the famous Visvamitra, who had begotten her after being seduced by an apsara (celestial damsel) named Menaka. Visvamitra went in shame to the Himalayas where he did penance for a thousand years, leaving Sakuntala to be raised by Kanva.
Dushyanta fell in love with (sakuntala and took her in gandharva marriage, as the kind of marriage formed without any Brahmanical ritual was called. Ssakuntala managed to get two promises from Dushyanta before he returned to his palace: that if she had a son that son would become the next king and that Dushyanta would send for her upon his return to the palace. When old Kanva returned to the asrama, he knew psychically the whole story and blessed Sakun- tala that her unborn son would in fact become king.
In the meantime, King Dushyanta had offended the irritable old sage Durvasa, who cursed Dushyanta with loss of memory. After six years Ssakuntala stopped waiting and took her son to the palace. However, Dushyanta did not rec­ognize her or remember anything. They argued until a celestial voice told Dushyanta the truth. Then the king relented, and their son, Sarvadamana, was accepted and later ruled under the name of Bharata.